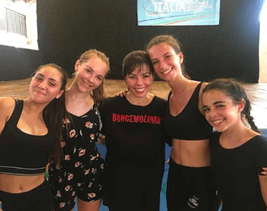 One of the winner’s of Copa Italia 2018 was given an opportunity to make her New York professional debut in Tony N’ Tina’s Wedding recently produced by DanceMolinari, Susan Campanaro and the Holy Apostle Soup Kitchen! The New York DMO team of Janine Molinari, Darius Fowler and Susan Campanaro, representing the United States in Dance, Music and Acting!

Here is an article written by Micol Brusaferro :

She went to New York for a week, where she flew, after she won the National singing contest in Italy. Nicole Perossa, 27 years old is radiant. She lived her dream of being on an international stage and is preparing to release her first record. This year she participated in the National Italian Performance of Coppa Italia Art Scene MetadoP.A.S.S., founder and creative producer, Valentina Spampinato.

She made it to the finals for three disciplines:  acting, singing and dancing for three categories:  Province, Regional and National. “In Rome, they classified me a “Complete Performer”, who united three disciplines of acting, dance and singing.”

Selected by American’s Darius Frowner, Janine Molinari and Susan Campanaro for a professional theatre performance in New York City, Nicole performed in the United States in “Tony and Tina’s Wedding”, a improvisational long-running Off-Broadway hit of twenty-two years with audience participation. “It was one of the most beautiful experiences of my life! I sang with professionals; it was stimulating, enthusiastic and an inspirational experience and important and unique!”

Nicole has been studying singing for ten years and aspires to continue studying. “I also have passion for theatre. I have acted in various companies in my hometown, in musicals and I, now, continue to study because we never finish growing. I am working on my own record with new songs.”

AT BROADWAYCON, FANS GET A CURTAIN CALL | THE NEW YORK TIMES

STEP INTO THE SPOTLIGHT

THE ART OF STAGE PRESENCE

VIGNETTES OF AN I-TALIAN AMERICAN GIRL