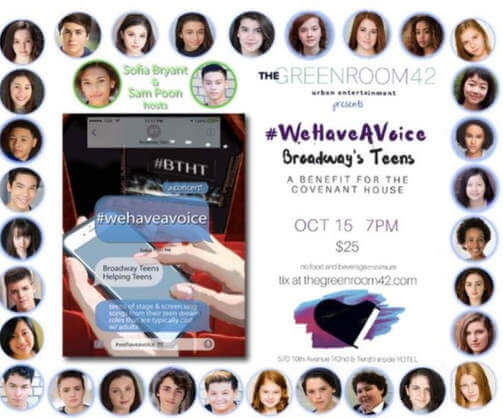 Teens Helping Teens is a concert where veteran teen performers of Broadway, Off Broadway, Film, and Television are coming together to perform songs from dream roles they don't usually get professionally cast in- that is, actual teen roles. For these performers, they often have to sit back as professionals during their teen years, in an industry where many times, adults in their twenties and even thirties play the roles of teenagers on stage and screen. This concert is their turn to take on those teen roles from shows such as Spring Awakening, Dear Evan Hansen, Bring It On, Grease, Next to Normal, Bye Bye Birdie, Fame, and The Sound of Music, just to name a few. Their proceeds will benefit Covenant House.
thegreenroom42.com

AT BROADWAYCON, FANS GET A CURTAIN CALL | THE NEW YORK TIMES

STEP INTO THE SPOTLIGHT

THE ART OF STAGE PRESENCE

VIGNETTES OF AN I-TALIAN AMERICAN GIRL