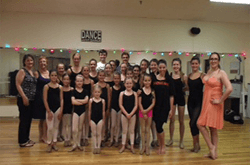 Dance Molinari teacher, Anthony Patellis, whose career includes world tours of West Side Story and TV’s ‘The Sopranos’, was present to provide acting technique and advice to the dancers.  Assisting Ms. Molinari was her student, Sean Curley, who she coached to such successes as the role of ‘Josh’ in the feature film ‘Reservation Road’ as well as a role in ‘Beauty and the Beast’ on Broadway. Sean demonstrated alongside Ms. Molinari, who taught choreography similar to children’s Broadway auditions as well as original choreography from the Broadway production of ‘Mary Poppins’.  Ms. Molinari herself is not only a nationally renowned coach and educator, but also recently choreographed ‘The 25th Annual Putnam County Spelling Bee’ right here in New Jersey at Monmouth University.

“I teach so many kids from all over the country, and your students were the most focused and enjoyable,” said Ms. Molinari about the KBSD-ADA dancers, “not to mention wonderfully talented and eager to learn!”  The dance studio plans on having Ms. Molinari return in the future for more fabulous musical theater workshops!