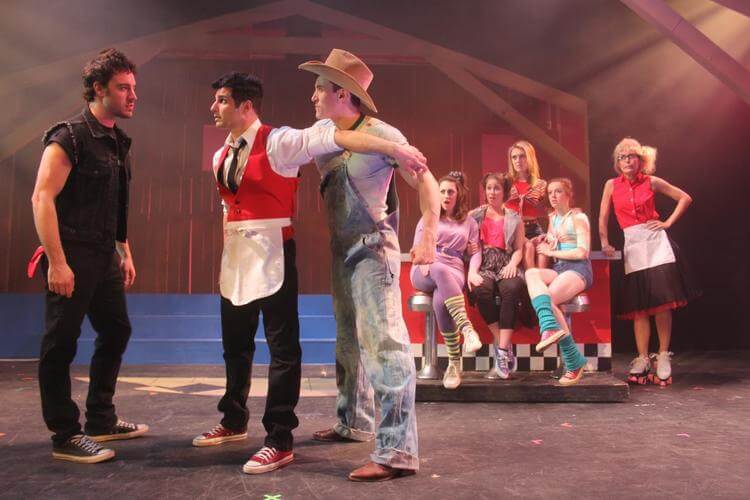 Seven Angel’s production of ‘Footloose The Musical’ has been getting rave reviews, as in five star rave reviews, but I could not fit it into my calendar until the matinee on Saturday. The theater was almost empty but the stellar cast performed like it was a full house. I was very glad that I got to see this energetic production…better late than never.

Every season, Actor’s Equity Association, gives 7A the allowance to reach out to a certain number of local performers and give them the opportunity to work alongside professional actors, directors, choreographers and designers. Several local and familiar actors round out this wonderful cast and add a lot to it’s success.

‘Footloose’ was directed by Janine Molinari, assisted by first time Seven Angels AD Jimmy Donohue. She also served as the choreographer with Bobby Gouse as associate choreographer. The dancing to the iconic top 40 songs from the eighties was amazing and the choreography made the dancers look like the pros that they all are. Ms. Molinari channeled her teenaged self who loved the 1984 movie and choreographed it to her heart’s content in her parent’s Staten Island basement. “It truly was a blast (from the past,) she writes in the program.

The terrific TJ Thompson was the music director and led the other three musicians in the excellent band in the pit. The lighting designer was Mathew Guminski and sound designer/engineer was Matt Martin. The set was designed by Brian Dudkiewicz, and Vivianna Lamb did the great eighties costumes paired with the big hair.

About five notes into his performance as Ren McCormack, I knew that Michael Damian Fasano, in his 7A debut, would be a triple threat. Elisa Arndt was down to earth as his mother Ethel; a community actress often seen at this theater, Diane Magas,   and George Lombardo played his aunt and uncle. Gary Harger sang very well as the staunch Reverend Shaw Moore who bans dancing in the town of Bomont TX. Katie Brady did very well as the preacher’s young daughter Ariel and Laura Beth Wells played her mother Vi.

Alec Varcas returned to the stage where he began his theatrical career to play the big lug Willard Hewitt and continues to be an amazing dancer and singer. Mr. Varcas, a Wolcott native, has toured with ‘Spamalot’ and was in theoriginal Off-Broadway cast of ’50 Shades the Musical.’ I have watched this actor grow up on area stages . When I first saw this young man in The 25th Annual Putnam County Spelling Bee in New Britain, I wrote the following: “a gifted choreographer, this is a young man to watch.” Little did I know…” So I felt a bit like his proud mom must feel as she watches his performances.

Holly Martin was at her comedic best as the roller skating Betty Blast and Cowgirl Sally. Community actor Gary Rosengrant did very well as Coach Roger Dunbar and told me that he has enjoyed every minute of working with this cast. Tina Vlamis and Kaynor Tech culinary student Tom Dowie in his first professional show rounded out the ensemble.

‘Footloose’ has been extended at Seven Angels through June 20. Shows added: Saturday, June 6 at 2 PM, Saturday,June 13 at 2 PM and June 18, 19 and 20 at 8 PM.  Tickets are $37.50 to $52.50. Seven Angels Theatre is located on Plank Road in Waterbury, Connecticut with plenty of free parking. Just off I-84. (Due to construction on I-84 in Waterbury, there are clearly marked detours. Please call the Box Office for directions and leave yourself a little extra time for a nice tour of Waterbury neighborhoods.)

5 STAR REVIEW for Janine Molinari who directed and choreographed FOOTLOOSE at Seven Angels Theatre with Bobby Gouse as Associate Choreographer: