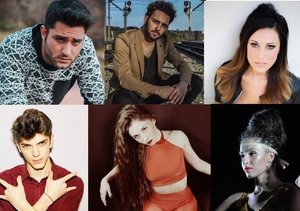 "You're coming with me to Connecticut"...from Italy!

Move over America's Got Talent! You don't want to miss this one-of-a-kind night at Seven Angels Theatre in Waterbury, CT. Janine Molinari, founder of Dance Molinari (DMO) NYC/Chicago/Los Angeles, is bringing the best talents of this summer's popular television show Performer Coppa Italia together to the United States!

The performers are from all over Italy, and were the top scorers in the singing, dancing, acting, and triple threat categories. The Connecticut live show will showcase the six cast members, including the overall 2019 winner, Francesco Faggi, who will be singing one of his original pop songs that earned him the coveted title.

When asked how this will impact the cast members, Valentina Spaminato (co-host/producer/creator of the series), who will also be at Seven Angels, enthusiastically said, "The opportunity to take the artistic soul that universally binds us anywhere in the world beyond the border and to see that where there is art, there is happiness, love and beauty!"

Dance Molinari Janine Molinari is the artistic director of Dance Molinari (DMO) NYC/Chicago/Los Angeles. Now in their 19th year, DMO is a company that trains young professional artists for Broadway, National Tours, Films, TV, and the music industry. In the last few years, DMO has begun expanding its role and is on the rise to become more of a production company, spear-heading films, workshops, new plays and more. Coppa Italia 2019 is one of these projects.

Molinari, who is also a seasoned performer, director, and choreographer, was invited to be a televised judge on the talent show in 2018 and 2019. Last year, she invited two of the winners to participate in the Off-Broadway revival of Tony n' Tina's Wedding: a show she has always been closely tied to.

About Seven Angels Theatre Seven Angels Theatre is a professional Equity Theatre in their 29th season and has been known for launching new projects and nurturing young talent. The "Broadway in your Backyard" theatre resides in Waterbury, CT which is home to a large, vibrant Italian-American community (a perfect welcome for these young performers in their U.S. debut). Janine has worked with Seven Angels's artistic director, Semina DeLaurentis, on numerous productions over the last 15 years, including Tommy and Jesus Christ Superstar. Fun fact: Aaron LaVigne, who was Jesus in Seven Angels' production of Jesus Christ Superstar, is currently playing the role on the US national tour!

"This concert is very important to me for my career. Confront me with American artists and especially with an audience. I hope to pass on my energy to all of them. I take every experience as a step towards my personal growth, and I'm sure the seven angels theater will really give me a lot. I can't wait to get on stage and share my emotions with the whole audience." -Rosario Rizzo (singer, dancer, actor, choreographer)