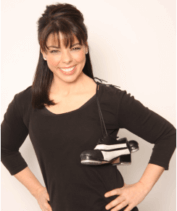 Through the years, Janine and her “DMO” team have taught hundreds of Broadway kids and adults. She is a director, choreographer, producer, and teaches master classes throughout the United States, Canada and Asia, including the Taipei International Dance Festival, Dance Theatre of Tokyo and a summer residency at the 92nd St. Y in New York City.

Janine’s work has also been seen on tv, film, music videos, commercials, nightclubs, many regional theaters, off-Broadway, and most recently an episode of Kickin’ It, a Disney TV sitcom. She is residential director/choreographer for the Seven Angels Theatre in Connecticut, where she will do the musical staging for a new play in February, Burning Desire, starring Lou Diamond Phillips, as well as direct and choreograph Legally Blonde in the spring.

As a producer, she was part of the “community” for Broadway’s Godspell, three successful runs of Vignettes of An Italian American Girl, The Annual Holiday Hop and the upcoming comedy web-series “Tap Out Of It!” Janine was also featured in the PBS documentary, “Annie – it’s the hard knock life, from script to stage,” as well as in the book “How To Act Like A Kid,” written by Henry Hodges and Margaret Engle.

Dance Molinari will host the 16th Annual Holiday Hop on December 22 at 7 PM at The Triad in NYC. It will feature multiple performing artists, musicians, singers and the dancers of Dance Molinari.

All proceeds will go to the Holy Apostle Soup Kitchen the largest soup kitchen serving the New York City area. In addition to the Annual Holiday Hop, Dance Molinari created Sole2Solemates, a program that brings tap and tap shoes(all donated and signed by the Broadway kids she teaches) to the underprivileged youth of New York City. For more information: www.dancemolinari.com.