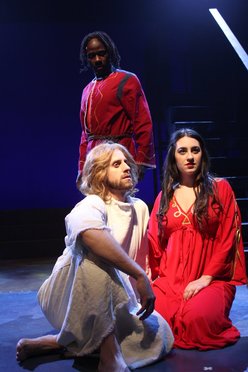 “All your followers are blind
Too much heaven on their minds
It was beautiful, but now it’s sour” – Judas in “Heaven on the Minds”
Waterbury, CT – Seven Angels Theatre continues their mainstage season with a powerful full stage production of the rock opera ‘Jesus Christ Superstar.’ This show is not a concert version of the amazing music by Andrew Lloyd Webber with lyrics by Tim Rice, but the stage musical based upon the original 1971 production featuring a cast of thirty excellent actors. This is truly an event in Waterbury that is not to be missed.
‘JCS’ is described as a “global phenomenon” that has been wowing audiences for over 40 years. This timeless work dramatizes Christ’s final days through the eyes of his betrayer, Judas Iscariot. It is all about the stirring score, sometimes rocking majestic and dramatic, sometimes satirical and tender, and this production under the musical direction of Bruce Barnes makes the most of every note.

I must admit that I am a bit of a ‘JCS’ snob. I am of the generation that listened to the iconic “Brown Album” recording incessantly until I memorized every lyric and note. I saw a production at Stratford’s  Shakespeare Theater a very long time ago and I drove to Foxwoods casino to see a fine touring company production several years back. The first time I drove to the Warner Theatre was for their community theatre production. All of these shows predate my reviewing career, but I have since written one about a great teen production by the Steeple Players in Southington. My point is that I know the show very well, and you cannot change a word or a note without me taking notice.

Seven Angel’s Artistic Director Semina De Laurentis chose mainstage resident choreographer Janine Molinari to both direct and choreograph this production. In her director’s letter, she shares that the groundbreaking rock opera served as her introduction to musical theatre. She grew up in Staten Island listening to the original 1970 concept recording (the “Brown Album”) and saw her first production of ‘JCS’ at a local high school. It was then she knew that she needed to make her life in the theatre. She writes, “My connection with ‘Jesus Christ Superstar’ continued into college, when I was cast in my first professional production earning my Actors Equity Card.” She went on to perform several incarnations of the piece, staged in a wide variety of setting and time periods.

To direct the Seven Angel’s production, she and co-director Anthony Patellis had many artistic decisions to make. They decided to return to the original source material, Ms. Molinari’s (and my) beloved “Brown Album” that she grew up listening to in her family’s living room. She trusts that for some of us, her production of ‘Superstar’ will bring back meaningful memories and create new ones for those (younger) audience members being introduced to this important contribution to American musical theatre. Trust me when I say that she succeeded in every way.

The way to accomplish this was to cast outstanding Equity actors along with some local performers who get the opportunity and experience to work alongside the professionals. Mr. Barnes conducts the small but mighty pit musicians that filled the theatre with the fabulous score. Excellent lighting by Michael Blagys retained the spiritual darkness of Christ’s final days but still allowed the audience to see the action. Effective sound by Matt Martin could not have been better. The costumes by Janell Berte were an impressive mix of biblical and modern and the “walk across my swimming pool” motif for “Herod’s Song” was a brilliant combination of pinks and oranges. It was also great to see the distinctively shaped hats on the heads of the high priests.

There was an impressive opening montage that previewed the action, but as far as I am concerned, if Judas doesn’t nail the opening song “Heaven On Their Minds,” it won’t be good. Christopher Faison, in his 7A debut, nailed it and every number thereafter. His heart wrenching performance of “Judas’ Death” made an impression, with the hanging mercifully suggested with blackout and shadows, before his return in white fringe for “Superstar.” Aaron LaVigne (‘Spiderman: Turn Off the Dark’ on Broadway) gave a strong performance as Jesus from the joy of Palm Sunday to his final breath.

Joseph Torello used his deep bass voice to tackle the role of Caiaphas; his mom Trish Torello attended the press night performance. Michael Thatcher sang well the tenor role of Annas. Robert Melendez was another high priest and Patrick Brancato was a soldier. Gary Lindemann was very strong in the role of Pilate and Paul Aguirre almost stole the show in the role of the flamboyant (and tap dancing) King Herod.

Chelsey Lynn Alfredo (Rusty in 7A ‘Footloose’) took on the only leading female role of Mary Magdalene and sang beautifully.
There was the perfect amount of choreography added at the appropriate times, because this is not a dance show. Truth be told, there were just a few lyrics that did not match the “Brown Album” exactly, but I won’t quote them chapter and verse. There were some tempo and key changes, but overall it was blissfully close to the source work and it was a good thing I was seated on the band side of the house. I love “Could We Start Again Please” that is usually sung by Mary Magdalene, the ensemble and Peter, but it was not on the “Brown Album” and it will not be sung here.

‘Superstar’ is presented with a 15 minute intermission and for me the first act flew by. The musical runs through April 23 at Seven Angels, 1 Plank Road in Waterbury. Those 25 and younger can purchase discounted tickets for only $25.
JCS Photo 1 Left to right: Aaron LeVigne (Jesus), Chelsey Lynn Alfredo (Mary) and standing  Christopher Faison (Judas).