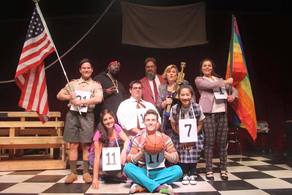 Seven Angels Theatre kicked off their 25th Mainstage Season on Columbus Day weekend with a joyous and energetic production of ‘The 25th Annual Putnam County Spelling Bee.’ The show will run through November 1 at the historic Hamilton Park Pavilion, easy to reach via a short detour to Plank Road in Waterbury.

One of my favorite musicals features six awkward young spelling champions that learn during the two hours that winning (and losing) isn’t everything. ‘Spelling Bee’ has a very funny yet touching book by Rachel Sheinkin and a unique score by William Finn. I always enjoy the fast-paced spelling action and in the hands of the this very talented ensemble cast, it moves along very quickly.

‘Spelling Bee’ veterans will know that the roles of some of the contestants are filled with audience volunteers. At the matinee I attended, Ms. Frau/Rona understudy Holly Martin and Logainne understudy (and Watertown HS 2015 grad) Danielle Fusco were in school-themed costumes greeting arriving audience members and looking for patrons willing to become part of the onstage action.

Because I was chosen to be one of the four extras, my view of most of the first act was up close and personal, only a little nerve wracking and so much fun. We were ad-libbing among some well-rehearsed professional actors and I was amazed that we did well enough that several members of the audience thought that we had been planted in the audience somehow. Those pros did an amazing job of warning us what we needed to do and once I relaxed and joined the cast in my mind, it was easy.
So my observations of a chunk of the first act were slightly less focused but I was able to return to my seat for the second. In actuality, the extras are onstage from “Pandemonium” to it’s reprise, but it felt longer. I still feel pretty confident that my review is quite a-c-c-u-r-a-t-e.

Cassie Hohn (‘A Little Princess’ Off-Broadway) was a caring adult Rona Lisa Peretti, the realtor and spelling bee vet who runs the annual spelling bee. Bradley Mott was the very funny Vice Principal Douglas Panch in his 7A debut, although his last performance in CT was over 40 years ago while in high school. Jerrial Young was memorable as Booker T in ‘Teddy and Alice’ in 2012, but here played “comfort counselor” Mitch Mahoney and sang up a storm during the curtain call.

The actors who played the elementary school students were carefully cast and directed by Janine Molinari, who also choreographed this show, her 16th at 7A. Michael Ferrara was the musical director and conducted the three other musicians who played the fun score very well. Graham Edmundson designed the lighting, Vivianna Lamb was in charge of the adorable costumes, and Matt Martin was in charge on the sound. Daniel Husvar took care of the scenic design, technical direction, prop design, and set painting.

Alec Varcas, who recently returned to this stage for ‘Footloose,’ was amazing in the role of the hyper Leaf Coneybear. I had seen him in this role before and his reprise was spot on. Mr. Varcas’ other credits include ‘50 Shades The Musical’ (Off Broadway,) ‘Monty Python’s Spamalot’ (National Tour,) and ‘Legally Blonde’ at WBT.

Mandy Leigh Thompson, last seen as Natalie in ‘Next to Normal’ with Artistic Director Semina De Laurentis, nailed the role of Logainne Schwarzand-Grubenierre. “Woe is Me” was quite adorable.

Finally, James Donohue reprised his role as the amazing speller William Barfee. Mr. Donohue’s credits are numerous but this role for me is tied with Seymour in ‘Little Shop” as one of his best.

‘Spelling Bee’ is a very fun two hours of entertainment. I recommend seeing this very professional production that is always a different show, depending upon who is chosen from the audience. Add to that the fact that there are several Waterbury references and some clever ad-libs by the adult characters behind the table. Look for the ladies signing up spellers in the lobby; I seriously recommend volunteering for what the audience member who sat next to me on the onstage bleachers called “the best seat in the house.” You will enjoy hearing the comments of fellow audience members after you are eliminated from the bee.

Evening and matinee shows available. Shows run Thursday through Sunday. Call the box office for times. (No Shows October 17). box office at 203-757-4676, online at sevenangelstheatre.org, or stop in on Plank Road in Waterbury.